Yao Xiao on Communicating Ideas and Emotions through Illustrations

Yao Xiao is a China-born illustrator based in New York City. Her artwork is colorful and full of imagination, and in her words depict “a poetic visual world where complex concepts and human emotions are examined, amplified, and given physical form.” The characters in her illustrations always carry vibrant personalities and energy. But what drew me to her was her Baopu series, a comic about the struggles and joys of a young, queer emigrant, Baopu. Baopu’s story is so like my own and so underrepresented in illustration, that I felt compelled to speak to its maker. 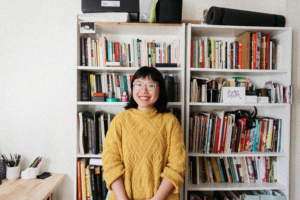 Yao, when did your fascination with drawing and storytelling begin?

My background is in drawing and illustration, and I received a BFA in illustration from the School of Visual Arts. I receive traditional illustration commissions for book and editorial, and some non-traditional stuff like experimental comics and storytelling. I grew up in China in the 90s. As a kid, I was quiet and liked to sit in my mo 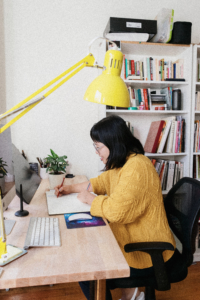 m’s study and draw when both my parents were out working. Unlike reading or writing, drawing was something I was able to play with at a very young age. I drew my own stories on cardstock and stapled them together to make “books.” When I did learn to read, I read everything in my mom’s study that I could understand, including Sanmao (三毛), a Taiwanese author whose story of nomadic exploration inspired me to this day, and a lot of children’s literature, many of them Chinese LianHuanHua (连环画).

After you graduated from SVA, how did you make illustration your career?

When I was in college, everyone was aspiring to freelance after graduation. So when I graduated from SVA in 2012, and I tried to “freelance” for three months. Then I

realized that freelancing was very easy to “achieve:” it meant that I had no job and unlimited time to make zero money until I became famous one day. I very quickly ran out of money, and looked for a full-time job instead, which landed me a position as an in-house illustrator in the niche world of visual notetaking. I worked in-house for four years, during that time I was still freelancing on the side.

Right now, I am freelancing full-time. This is my first year freelancing after quitting my job. Leaving my job was difficult, and I had to build the courage to pursue what I have always wanted to do, which is to work for myself. It was a big change because after I left my job, I would get up at 9 a.m. not having the slightest idea about what I was doing and, all of a sudden, not having co-workers to bounce ideas off of. I’m on my own now, but I am so glad I did it. I’m more used to finding inspiration and feedback outside an office environment now.

Looking back, do you have any advice for our young illustrators who are just finishing up their programs and looking for a job? 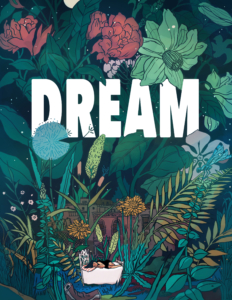 Now that I have experienced the post-graduation trajectory, I would suggest prioritizing your immediate needs in the moment. For example, I knew I needed a full-time job to rejuvenate my deflated bank account, even though at the time I did not realize that I would also appreciate the experience, structure or the co-workers much, much later. If you don’t need a full-time job but you desperately want to meet more people outside of academia, I could keep experimenting and networking while freelancing. Especially if your family is helping you financially, I don’t think a full-time job is necessary for the creativity. An agency job will likely change you as a creative person—it builds a kind of militant discipline in having to report to someone five days a week, sometimes even more. In your spare time, you can still try to do your own work but it is easy to burn out or feel stuck in the agency world.

What is your creative process? Because for a lot of people it is difficult to start and finish a project.

With illustration, it is a lot easier because I have an assignment, and I have a client. It is like a design project with a creative prompt and a deadline. There is a clear goal to strive toward: how do I use imagery to communicate an idea to my clients and audience? I would just keep trying different things with thumbnail sketches, until I end up with something that I am happy with. It usually comes from my own response to the article or the concept that I am illustrating for. It is a rather intuitive process. Before I send it back to the client, I would go back to the prompt to make sure it didn’t stray too far. Then it will go through rounds of back-and-forth with the client before I make the full illustration.

Sometimes I feel burnt out over a project, and I tell myself to just sit down in my chair and just start moving my pen. Something starts happening and, ten minutes later, I wouldn’t even remember that I didn’t want to do it. The initial part of the process is the most challenging and then the rest of the project flows naturally.

I came across your Baopu comic series on autostraddle.com. Can you talk about what it means to you?

It was 2014 and I was 24, heartbroken from two failed relationships. I was coming to terms with my queerness. I was thinking a lot about cultural acceptance of queerness, and its relation to my being Chinese. I came out to my mother, and we had this talk that really broke my heart. She was accepting enough in theory but she thought that it won’t ever work for my life. Those experiences prompted me to begin Baopu. 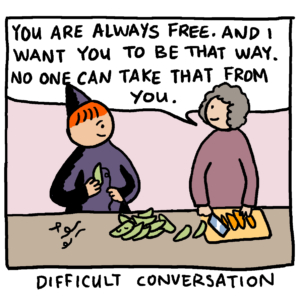 In American queer culture, there was a lot of focus on coming out to your family. It was difficult for me to find a community of people like me, who had families overseas who are culturally conservative. In the comic series, I didn’t try to explain it to my white queer friends, thinking that it would reach a queer bi-cultural Chinese audience that could understand it. The queer community at the time in New York felt overwhelmingly white, and I luckily joined a part of the wave that made the community more diverse and open. The Chinese queer community is still vulnerable in many ways but it is a lot more visible now.

My sensitivity and awareness of the world around me and my ability to laser-focus on finding solutions makes me powerful. It started as more of a survival tactic, but now I am feeling more grounded in my life. I can help others find their passion and courage as well.

Finally, is there an object or something that gives you power when you need it?

Even though I am an illustrator by trade, writing gives me power the most. I reach for my journal when I feel confused and baseless. I have a weekly check-in journal where I document my schedule and what I was feeling, and I have a “life” journal that I have kept for ten years in which I speak honestly with myself and parse through challenging times in my life.

Check out Yao’s work on her website and read Baopu on autostraddle here.