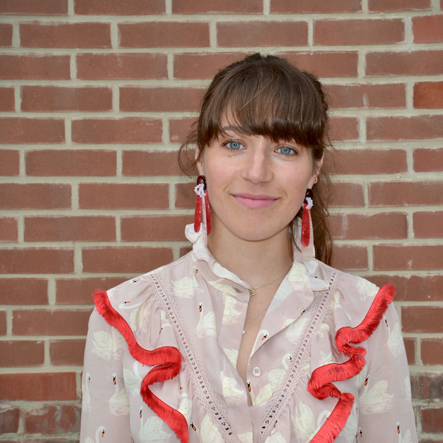 We met Jessi at a coffee shop in Lincoln Park, Chicago. She was wearing a light pink long sleeve blouse with a swan pattern and red details from Stella McCartney, green floral silk shorts, and dangly earrings that matched the red and pink in her blouse. On her feet were beige and silver heels. She was carrying a beige purse with metal details from Elizabeth and James. She immediately showed energy, drive, humor, and her passion for fashion and style. Her colorful outfit directly portrayed her personality. She spoke carefully with detail as she shared the story of her career and answered questions.

Jessi managed to meet us among a busy week of styling projects. She was preparing to travel to New York for work next week and Amsterdam shortly after. She explained that she excelled at her career through perseverance and her willingness to constantly reach out to people to find unique opportunities. Jessi is someone who loves multiple styles, not just one aesthetic.

She came across effectively depict, yet thoughtful. At one point, I found myself relating to Jessi because of her ability to really paint a picture of her career, home life, interests, and passion for fashion.

Jessi, how did you first get started on a career in fashion?

“I am originally from Chicago. I studied Fashion Design and Apparel Merchandising at Indiana University. I applied for the YMA scholarship in college and won! I got to go to a banquet in New York. I got an email to go to a roundtable with Kenneth Cole, Tim Gunn, and Cynthia Rowley before the winner’s roundtable.. I flew from Indiana to New York (thanks to my mom for paying). I ended up having a layover in Atlanta and was going to miss the event, but I decided to still go. So, I pulled up in a taxi at the FIT (Fashion Institute of Technology) building exactly when it ended. It ended at 2:30 p.m. and I slammed the door to my cab at 2:30 p.m.”

Was it worth it to still go to the event in NYC after it ended? 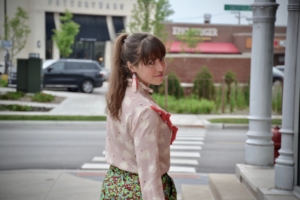 “Yes, I ran inside. Students were talking to the speakers. Tim Gunn was there and another student said to him, “do you ever need help for the Project Runway finale show?” He handed that student his colleague’s (from Liz Claiborne) card. So, I said, “Can I have a card too?” – thinking in my head that I had to make this trip worthwhile. I emailed/stalked his colleague monthly reminding her how interested I was in working on the finale show. Randomly, months later, I got a call from Bravo TV asking if I could come help backstage. I was going to help on the Season 4 finale show – Christian Siriano’s season.”

What did you do backstage for Project Runway?

“I did a lot of hand sewing for Jillian Lewis. I was with students from FIT, FIDM, and Parsons. I was, surprisingly, the only one who could hand sew. Manual skills are still very important in this industry.

Due to that, I got paired with Jillian Lewis. She needed me to resew seven hook n eyes for a dress to fit Jaslene Gonzalez, an extremely small model. If you watch the episode, you will see me on the floor sewing furiously like at a sweatshop.”

Did you stay in touch with Jillian Lewis?

“I did, and I wanted to work with her following the show, but due to the chaotic day, I was unable to get her contact information. Later my sister found her on Myspace, and I messaged her on Myspace. She responded! But sadly said she didn’t need help right now.”

What was your next step after working on Project Runway?

“I graduated from Indiana University and was working retail at Nordstrom’s, which was a great experience. One day, I was walking into Nordstrom and Jillian Lewis called me asking if I could be her assistant. It was unpaid, but I had to do it. I sold my car to pay for a year of rent. I had some friends I could live with in New York. I bounced around a little bit. I worked with her for a year.”

What was it like working for free in NYC?

“Sometimes I would work four jobs in one day to make money. I would wake up at 5:00 a.m. and teach a group exercise class, go work for Jillian, go to Bloomingdale’s to work retail for 3 hours, and then work at a bar until 2:00 a.m. I didn’t do this every day, but a lot of days. I loved working for Jillian, which made it worth it. I learned so much from sewing to sourcing buttons and more. But she was struggling, and I wasn’t getting paid.”

Did you want to stay in NYC and become a designer?

“New York taught me that fashion design was not for me because you have to decide on a specific aesthetic in order to become a brand, and I liked too many looks. I love lots of aesthetics and styles and time periods, so I moved back to Chicago. I needed to gather myself because I was so poor. I moved into my grandma’s basement with my sister and began to reposition myself for the styling world.”

In Chicago, how did you make your way into a career in fashion?

“I got a job in luxury bridal. We would have people borrow the bridal gowns for shoots and we had to keep track of them, so I would volunteer myself to go on the shoots. I met models, photographers, hair, and makeup artists. I made a network. My friend Ben, the owner of BMP Film Co. had just opened a hair salon, Epoch, in his studio space. I expressed to him I was ready to make the leap, and be freelance full time for styling. That was when Evole was born. I would just reach out to everyone and work for free, and it paid off. My family called me a “volunteer stylist!” 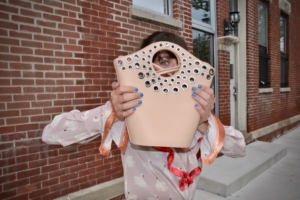 Did you move onto other jobs in Chicago while styling?

“Yes, I kept moving around. I was working for a company called Visual Therapy. They are based in New York City and I worked with their Chicago clients. I loved it, but then started to feel like I wanted more. I decided I needed to exhaust every outlet of styling in Chicago. I started commercial styling. Due to working with one production company who was pulling Union permits on my behalf, I earned my way into the Union. Commercials were great. They paid well, but they were not as creative, BUT I was no longer a starving artist. I would concept and style my own (test) photoshoots as a creative outlet.”

You are now also a costume designer. How did that become part of your career?

“I discovered there were two Unions in Chicago – I was already in Local 476 and the other (for film and TV) was TWU 769. I am obsessed with the storytelling that comes with creating a character. I love the mix of fantasy and reality. I would call the “out of work” list for 769 every single Monday…and I mean every. Because of the massive increase of filming in Chicago, 769 needed great Costumers. I shortly worked my way into 769. My philosophy is, decide where you want to be and insert yourself. I began to realize how Costume Design was exactly my perfect mix of all of my skills and experience wrapped into one.”

What advice do you give to women trying to figure out their career path?

“I am not a type A planner, but I am strategic. I am very calculated in the steps that I make in order to be efficient. I don’t try to do something that everyone else is doing. There are so many stylists, but there are more than ten versions and outlets of it. If someone says they want to do one thing for their career, you must then backtrack to this moment  and think about what steps you should do now to eventually get there. Little bits all add up. No one accomplished a goal overnight. As long as you are making smart moves that add to the big picture in mine, you are right where you are supposed to be! So many times, I send emails and hear nothing back. You have to just be okay with rejection and just stay focused.”

How do you stay so focused and organize your work?

“I compartmentalize my work and focus on one thing at a time. It is different from multitasking, I do that too. I am always doing more than one thing at one time all day, everyday. My mom always says, “how do you keep it all straight.” Well, I write everything down. It frees my brain from remembering small things. My work never really stops. I get home from a shoot, and I am on my computer trying to catch up on stuff I missed while on the shoot. But I have learned to be in the moment as much as a I can. I treat exercise like a meeting. I work it in every day. It keeps me sane.” 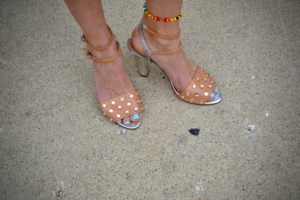 “First, I feel most powerful and confident when I feel healthy. I was a competitive gymnast as a kid. That kind of discipline and mindset came at a young age along with exercise. My parents really made us eat healthy when we were young. I learned that having a very clean, unprocessed diet is important. After college, I wasn’t feeling my best because I ate and drank badly. I wanted to get back to my happy place. I am an Aries, we are naturally very high energy. I found exercising and eating really well is top of the list for me. It is a lifestyle. I try every day to eat things that nourish my body, and exercise goes  hand in hand with that. There is so much good that comes from exercise. It doesn’t need to be a big class; it can be simple. When I eat bad, I feel it right away. I feel my energy drain. I feel crabby. Physical and mental power and confidence comes out to external power and confidence.

Second, versatility is power. Being able to work with your surroundings and find the best in the people that you are around. Being adaptable enough to work with all clients, budgets, and situations makes me feel powerful and confident. Being able to switch gears really fast is empowering. Styling isn’t all about pretty things. You have to be clever, think fast and outside the box and make magic happen!

Last, being able to look back and see how things went right and went wrong and knowing how to improve more for the next time is powerful. Moving forward is powerful.”