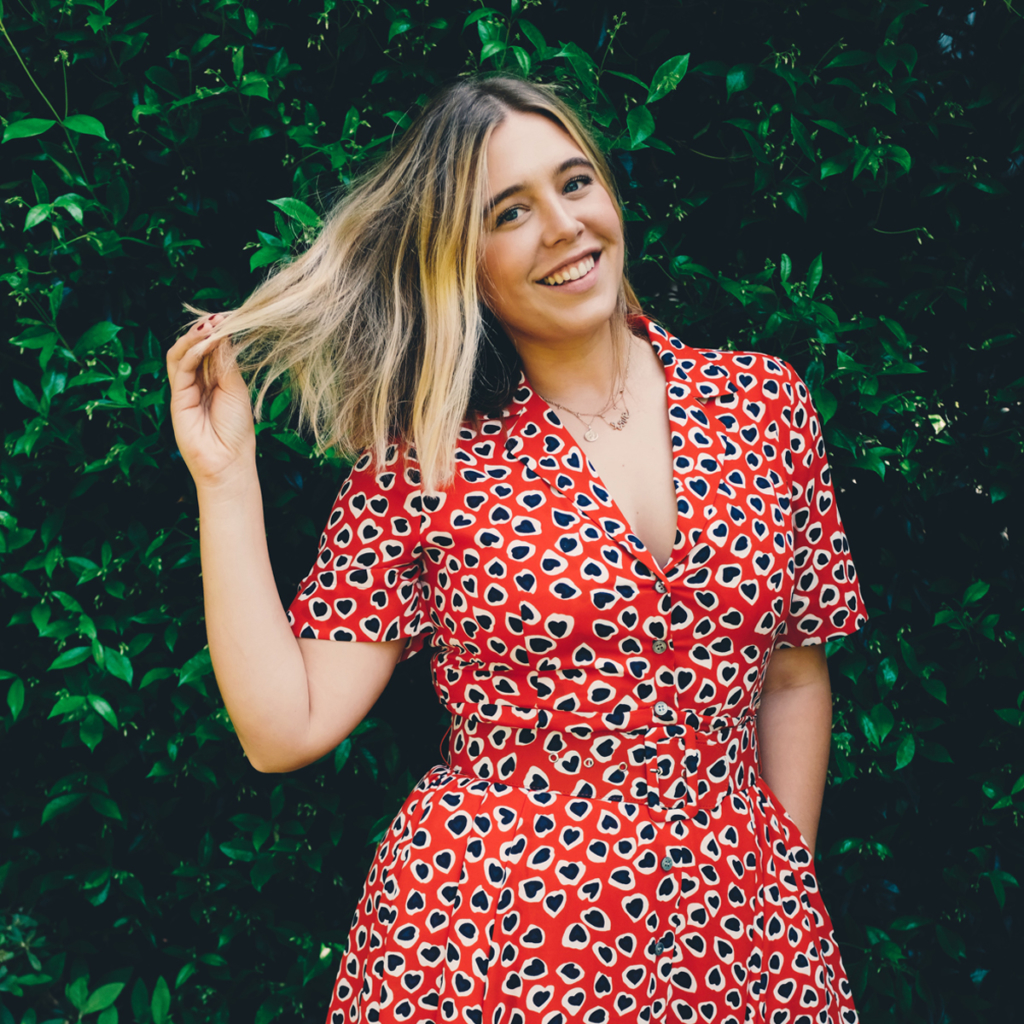 Rylee is a freelance live action director, creative director, digital expert, startup advisor, and creative director. She joined Snapchat when the company employed approximately a dozen people, working there for seven years as Snap Inc’s Director of Creative Media. She became the youngest woman to direct an IPO Roadshow film for a multi-billion dollar company, and is an official patent holder for one of Snap’s Augmented Reality inventions. Rylee’s commercials have generated more than 40 million views on YouTube and trillions of views on the Snapchat app. She was born and raised in Los Angeles but moved to New York City to study at New York University’s Tisch School of the Arts. Now back in Los Angeles, Rylee is a director at Big Block, a creative services company. She is engaged in promoting and supporting women and wants to attract more women to filmmaking and tech. 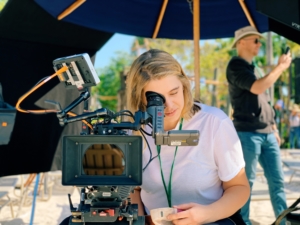 Where are you from and where did your creativity start?

I was born and raised in Los Angeles, California. I was a musical theater kid. I loved acting and did theater in middle school and high school. Both of my grandfathers were actors and creatives. I grew up in an eccentric, creative family, so it felt natural for me to get into it. In 9th grade I remember playing Edna Turnblad in Hairspray (a role made famous by Harvey Fierstein), and I was a girl playing a guy playing a girl. Doing something out of my comfort zone pushed me at a young age. Doing theater helps me to direct actors better and set me up for working in my career today.

Why was acting so impactful for your career today?

It taught me how to be flexible, think quickly, and be in the moment. I tell everyone that you have to act at some point. Especially improvisation. This helps with communication, which is something you use in every job. Some people feel really nervous in front of others, but improvisation helps you think on your feet and stay positive — ‘YES AND!’ Everyone should try improv. 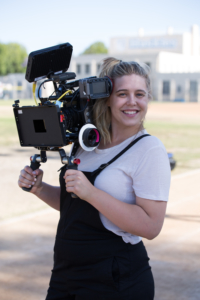 When did you make the switch from acting to filmmaking?

In high school, I started to think about filmmaking. I did a summer program at New York University, and started considering directing, writing and being behind the camera instead of in front of it. I liked being able to control the main story and work and collaborate with other departments (production design, cinematography, etc). I went to film school at NYU Tisch and I knew I wanted to be a director and join the Directors Guild of America someday. I’m super proud to say that I just joined the DGA this year which is a fantastic community with great benefits and support. After many years of directing, achieving this milestone was a huge moment for me and I’m excited for what’s next.

What advice would you give to college students or young adults in New York City?

Be humble. Be hungry. Be kind (to everyone!). Also, be open minded. My professional journey began because an old high school friend, Evan Spiegel, the co-founder of Snapchat, reached out to me. At the time, I was doing short films and eccentric comedies at NYU. Evan said he needed a director for his first commercial. I had never made a commercial before, but it was still a directing gig and I was excited to take it on. The lesson: be open to different opportunities. It may be unexpected but there’s strength in diverse experiences.

Why did you move back to Los Angeles from New York City?

I came back for my first job! I came back for Snapchat. I graduated a semester early, and I joined as the in-house director running Snapchat’s creative agency, working right out of school when we were just starting out. When we had 30 employees and a few hundred thousand users I thought we had made it and we were at the peak of success. I was wrong! Ha!

What did you learn from your career at Snapchat?

I learned so much and am so grateful. I learned everything: how to create a project from A to Z, communicate, collaborate, support team members, and how to make things work on a budget. Since startups have strict budgets, you have to find creative ways to make compelling projects. It made me agile. There are tons of problems to solve and a lot of creative ways to solve them. It helped me understand the power of a brand and marketing, and how powerful storytelling is for a company.

Why is branding so important? How did you help create a strong brand at Snapchat?

I think what is really cool about Snapchat is that it’s a very wonderful and unique product and the brand is simply a reflection of the product. We had one of the best jobs in the world, because our job was to be the storytellers for a storytelling platform.

What do you do at Big Block?

I’m a director at Big Block. This is a transformational time for advertising and I am excited to help brands break through the noise and create cultural moments. My experience at one of the top social-media platforms gives me a unique understanding of storytelling and advertising in the digital landscape. I just finished a campaign for Disney World and Yellow Shoes, which was really exciting!

You’re not at Snapchat anymore.  How did you make that transition?

I went to film school to create indie features. My goal was to work hard to get into the Director’s Guild and continue to work on film & tv projects. Snapchat was such a great unexpected  adventure, and it’s been nice to transition to being a director 100% of the time. I also want to direct original content as well as commercials. It’s such an exciting time to be a storyteller, to be a woman in film, to work with brands, and to work on projects that enable innovative storytelling. And as I mentioned, I just joined the DGA & I look forward to many more narrative projects as well.

What has been your favorite project to date?

Snapchat reaches 90% of 13-24 year-olds in the U.S. and I directed Snapchat’s Voter Registration Campaign in 2018. We shot and edited it vertically. The ads ran on Snapchat and encouraged users to ‘swipe up’ to register right away. The results were fantastic! We registered more than 400,000 new voters in key states like Texas, Georgia, and Ohio with competitive races. Young Americans are historically the least consistent votes, so it was nice to see the impact. I am hoping to do more public policy work because it is important, especially at a time like this. Democrats need major help with their digital & social strategies and I’m like — let me help you!

What is the largest challenge you have faced in your career or in the film industry?

It can be challenging to navigate gender bias, but the best way to overcome it is to not absorb it, find great mentors who support you, and don’t give up. We’ve made incredible progress but I would like to see even more women in positions of power, on boards, and in charge of financial resources. I like to say… here’s to women in film! May we be them, may we know them, may we give them funding. 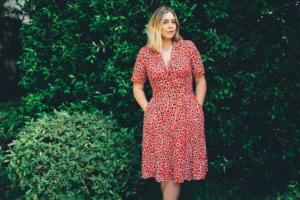 I feel the most powerful when I am creating something and collaborating with others. It is a very powerful thing to make something out of nothing. I also love working with a crew of talented artists to complete work we are all proud of. I’m grateful to be a team leader and I enjoy encouraging others to make their best work. One of my favorite Ruth Bader Ginsburg quotes is… “Fight for the things that you care about, but do it in a way that will lead others to join you.”

What is something you use or do daily?

I try to have ten minutes of quiet time in the morning when I first wake up. It’s an important moment, just ten minutes. I don’t look at my phone.

What do you plan to do next?

I’m excited about a lot of things!! I would love to make things that really inspire people and generate empathy. I want to surprise and delight people. I want to create work that shows a positive future with technology, not just a dystopian one. I have a couple of things that I am really excited about that are coming together, including getting more women into film and tech. I love going into schools and meeting enthusiastic minds, from middle schools to speaking at Brentwood School’s Young Women’s Conference called “It’s Our Turn” and at USC’s “Own It” women’s leadership summit. I’m also involved with initiatives such as Free the Bid and Women in Film, and am looking forward to continuing to connect with other women.

Rylee, you have so much experience with film and Gen Z. What are some insights you have as a Gen Z expert?

Gen Zers enjoy community, whether that’s online or in real life. That’s why Reddit, Twitch, Instagram, Snapchat, etc. are popular. Second, people will continue to be creative so any app centered around self-expression will continue to do well. Everyone is creative, but not everyone is artistic. Apps like VSCO, Unfold, TikTok, Bitmoji, etc. are all great creative tools. Companies are investing in more mobile experiences because time spent on mobile is going up exponentially. I’m excited to see all of the new products that will continue to come out. Augmented reality is a fun mobile product, transforming your world using the camera, and we’ve only scratched the surface. 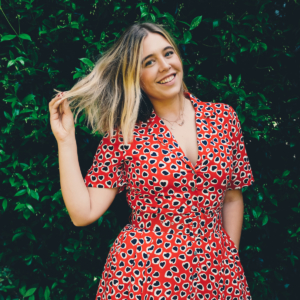