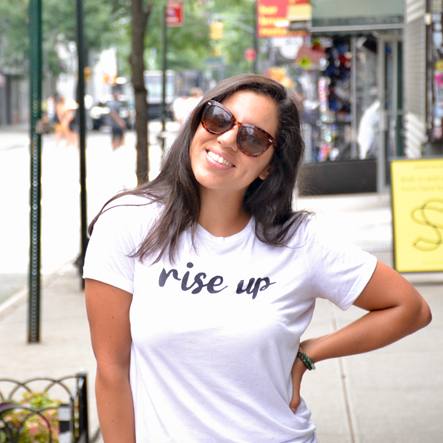 Pamela, the founder of Rawly Bold

Pamela is the founder of clothing company Rawly Bold. She launched it in 2017, and has enjoyed creating a powerful conversation and impact through her brand. She was born and raised in Los Angeles and moved to New York City with big dreams in 2012.

We meet Pamela on the Lower East Side at Juice Press. She confidently walked in wearing one of her Rawly Bold T-shirts stating “rise up.” She spoke smoothly as she told us about her childhood, career, and reasons for founding Rawly Bold.

Pamela, tell us about your move from LA to NYC.

“I come from a Latin household. My family is very over-protective, to the point where my parents would not let me go away for college. They were very old school. I graduated from college, and I wanted to live in New York City. At 25 I was working for an accessories company in Los Angeles, and I was traveling to New York for work. I made it a point to network every single trip. I started making friends. In 2012 I quit my job in Los Angeles with a plan to move to New York. I was lucky, and the next day I got a call to interview with a company in New York. They called me Monday, I took a one way flight on a Wednesday, they interviewed me Thursday, hired me Friday, and my first day of work was the following Monday. It happened so fast. It was meant to be, and I just followed my instinct.”

Were you scared to quit your job and move so quickly? 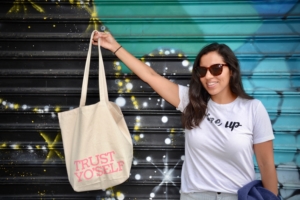 “No. I had nothing to lose. It was just the right thing for me to do. Nothing was holding me back. I was committed and determined so failure wasn’t an option. I just followed my gut.”

Did you start Rawly Bold when you first got to New York? What did you do first?

“No, I had a variety of other jobs. First, I was in sales at a licensing company for men’s urban wear. Then I moved to fine jewelry. I switched to medical sales because there were better benefits. It’s still my full time job. I call them my investor. During my second year, I learned colleagues who had the same job as me and same level of experience had a higher salary. I had multiple difficult conversations with my higher-ups. They did not increase my salary. That was the moment I decided to start my own company. I wanted to start something that would inspire women. I worked in apparel before and ran an e-commerce website, so I knew the business. I launched Rawly Bold on October 11, 2017.”

What is the mission of Rawly Bold?

“Everything is created to inspire, motivate, and empower women. It’s important for me to give back to organizations who are working towards enhancing the lives of others, so I decided to also have some proceeds donated to charities. The world has become consistently negative. I became overwhelmed and decided to create a brand that restores positivity.”

How have you grown the brand?

“People really love the mission. To reach people we use social media, have pop-up shops, collaborate with other brands. I am a true believer there is space for all of us, so it is important to collaborate.” 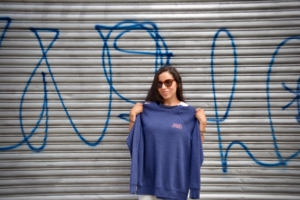 Do you have a team or is it just you?

“No one else is involved. This is just me. I self-fund everything, which is why I only started with four pieces. A few weeks after I launched I found We are Women Owned, which does events, brainstorming and a community to help women in business. It has been incredibly instrumental to the growth of this company. I am not sure where I would be if I hadn’t found that community. I am so grateful.”

“To me it means to be fearlessly authentic and to be you. There is nobody else like you. Being powerful is to really embrace who you are wholeheartedly.