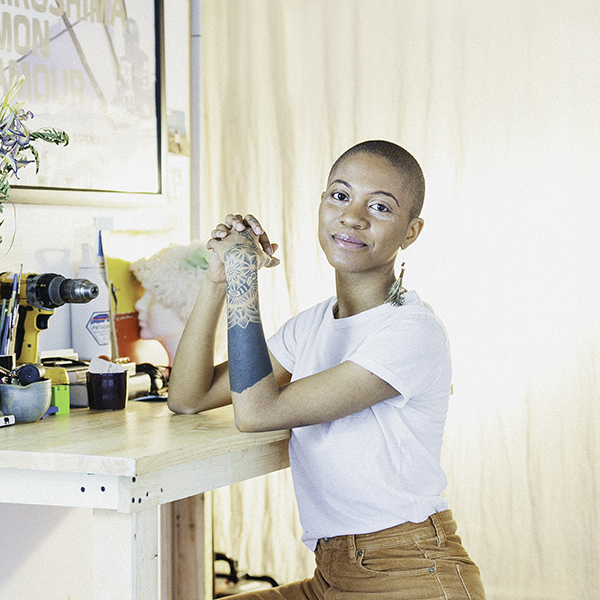 Nova on Filmmaking, Improvisation and Collaboration

Nova Scott-James is a filmmaker, artist, and creative coach from Harlem, NYC. I met her in at the Flux Factory, an artist community space in Queens to talk about her childhood, filmmaking, and her current projects. She has been working on a documentary film called “Wild Darlings Sing the Blues and It’s a Song of Freedom,” in which a group of queer women and non-binary people of color build a healing sanctuary. Nova also discussed the power of authenticity and how power can be used in very different ways. 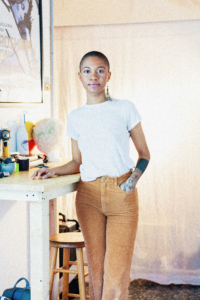 Can you tell me about how growing up in Harlem influenced you and your work?

I love talking about Harlem. The cultural energy and the art in Harlem are so vibrant, and I was enriched by the energy and art as a child. I was always inspired by the space but not until I went to school in California did I realize how impactful Harlem has been on my life.

There is something about the energy on the street and smelling the incense, seeing vendors sharing work about the Harlem Renaissance, whether it be books or music. All the different smells, sounds, and textures completely enchanted me. For me, the spirit of Africa is alive in Harlem. I have said that before and I will continue to say it, because it feels so true in my heart.

It manifests in different ways, one of which is jazz music and the culture that surrounds jazz. Both my parents have always been in love with jazz, and growing up I listened to a lot of jazz music at home. The connection between jazz music and my art has become clearer as I discovered the importance of improvisation and spontaneity in my work. For example, in my project Wild Darlings, I brought together certain people to collaborate on a piece. Each person brought something very clear and different to the table, and there was space for everyone to play and bring their style into the playfulness. In other words, I value having structure and experimentation at the same time, which I think I learned from jazz.

What inspired you to get into filmmaking?

I became obsessed with films very early on in my life, and my mom gave me a little digital camera as a present. I had a close relationship with my babysitter, Erma, and I would ask her to act in my films and I would act in them as well. Recently, I have been writing and reflecting on some of my early films that I made as a child, one of which is called “The Slave and the Empress” or something. As a child, I experienced sexual abuse at the hands of teachers at my elementary school and by a family member. That was very difficult to move through. I was holding the pain of that for a long time. I was making films and other forms of art like poetry and theatre to process the experiences that I was having.

I wasn’t sharing my work with anybody at the time, but I’m of course thrilled now for opportunities to share my work that deals with these tragedies that are so challenging for us as a collective. I now have the ability to share my work and experiences with other people and support those who went through similar experiences.

We collectively have a responsibility to learn how to heal the human pain that manifests from rape, and we have the power and capacity to tend to this on both a micro and macro level. This clarity drives and grounds a lot of my work.

Thank you for sharing that. Can you tell me about a project that you are proud of?

I am very excited about the feature film that I am working on now. It is a documentary narrative film, a hybrid between the two genres. I love how it is so collaborative. We have this group of women and people with beautiful stories and spirits. People need stories because they help us process consciousness and what it means to be alive. We’re able to access our unconscious and nonverbal energy through the language of film. I love how our stories are so different, but also woven into the same quilt, the same social fabric.

The film is Afro-surrealist in the sense that the people featured are primarily of African or Caribbean descent, and we’re gathering first in the name of black women blues singers who shared the medicine of their music with the whole country at the turn of the century. We’re planning to gather on a former slave plantation, a space that holds so much pain for us as a nation. We gather to honor that pain and also to celebrate spiritual expression and liberation. We will be creating a commune on the plantation: cooking, camping, and workshops involving dance, music, and healing. By acknowledging the pain in the land from slavery and colonialism, we process and transform it into new energy through art and dance. The whole process will be documented and shared as a feature-length film.

Because you are creating an event, is the event itself the art or is the documentation the art?

Both are true. Us coming together in solidarity is a performance itself. Even if there are no cameras, it is a powerful collective self-expression. Film is part of my tool kit, and it becomes part of how I engage with people, and it is a tool to transfer energy. What we are doing will be transmitted through film, and, in viewing the film, the viewers will become part of the experience.

What are some of the challenges you face? 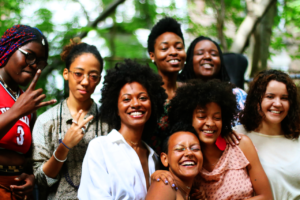 I have gotten to a place where I value and cherish challenges because they are nourishing. Challenges themselves are part of the medicine, bitter sometimes, in solving the issue. We have the opportunity to gain wisdom from our challenges, but it is like an invitation or a hand reaching out. We don’t have to take the invitation, but, if we do, there is so much wisdom is available.

A big challenge in my work has been rushing into a collaboration and realizing that we are not a good fit together. Building a relationship with collaborators is important and key to the success of the work. I try to manage people’s expectations, put things into language, and communicate wants and needs.

I see power as raw energy that can be used in different ways. It is disheartening when I hear that power is inherently negative in some way, because power can be used in an abusive way, but it could also be used as energy of love. In conjuring power as the energy of love for myself and for my community, the power grows exponentially.

Authenticity is a form of power for me and a way that I harness potential energy power.
When I express myself authentically, I feel powerful. I have noticed and believe that when I feel the power of my authentic spirit, it shows up around me and on people near me: we can share that energy. On the other hand, I have found that when people are disempowered, then a disempowered energy gets shared.

Do you know what’s powerful, also? Listening. It is one of the most powerful things we can engage in.

I love to meditate. I feel the power of my consciousness and in tune with myself when I meditate. For people who are starting out, I would recommend some type of intensive course where you can immerse yourself and feel supported. I once went on a ten-day silent meditation retreat, and I learned so much from it. Once you have the tools to meditate, you can do it anywhere.