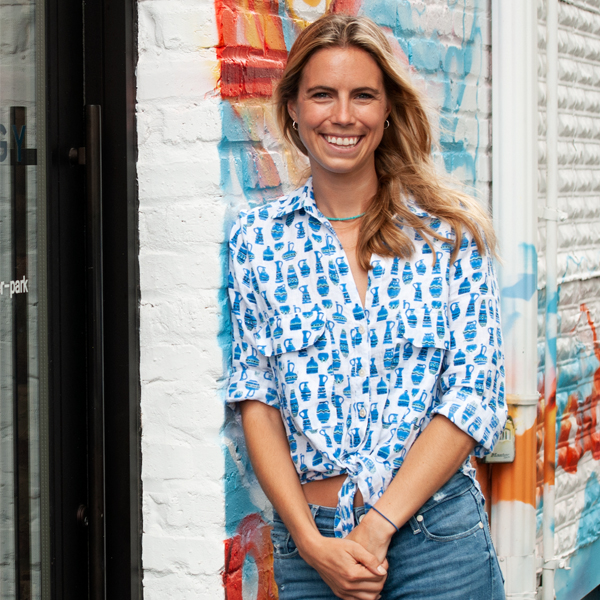 Liza on Running a Small Business and Fostering Community

I met Liza Solberg through one of the instructors from Spynergy, Liza’s new spin studio in Chicago’s Wicker Park neighborhood. As we walked to grab coffee, Liza waved hello to her contractor- with an open and friendly demeanor, she’s already built connections with people in her new local community. At just 26, Liza is a small business owner- more specifically, a boutique spin studio owner. She talked to the Power Thread about fostering community through spin (indoor cycling), music, and positivity.

On her spinning beginnings:

I’m from Winnetka, a northern suburb of Chicago. My mom owned a spin studio while I was growing up- that’s where the story is going! She started Spynergy with her twin sister in 2002 in Winnetka, so it was always part of our family. I didn’t really realize my mom was an entrepreneur. What drew me to spin, especially with my mom’s studio, was the community element and the personal relationships I formed, honestly more than the fitness aspect. 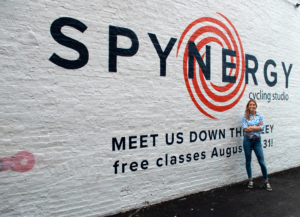 I started a teen spin program while in high school. It was awesome because there were a lot of people who didn’t make sports teams at my huge, highly competitive school (I had over 1,000 kids in my graduating class!). They had something to participate in and look forward to consistently during the week- and I did too! People would come to class three times a week, treating spin as if it were practice, never wanting to miss a workout or let down their team. I also taught spin classes at Colgate University, where I studied peace and conflict studies.

I ended up in Denver, working in multicultural marketing and working at a local spin studio on the side. From college in New York to taking a new job in Colorado, I may have moved cities and transitioned from student to real-life employee, but the one consistent force in my life was always spin.

When I was looking to switch my career in Denver, I wanted something that would allow me to spend more time with people. And then I thought, wait a second- this thing I do every single day is a perfect fit! But, I was thinking that fitness culture was superficial. I realized I didn’t have to be part of that. I could help bring something new and real to that industry – a concept rooted in community.

On building her own business:

The reason I chose Wicker Park as the studio location is because I think it’s a “neighborhoody” area of Chicago. I want to channel the vibe of community. I chose this space- it has a skylight, exposed brick, it’s in an alley- is because I wanted to break the boutique mold of feeling like you’re walking into a whitewashed box. I want people to come in and feel like they’re adding to our brand. You come to class, it’s your birthday and you love a particular song- okay, I’m going to play it for you.

Something that’s been cool in this process [of building Spynergy in Wicker Park] is that I’ve met so many women business owners that are not only so smart, but have been willing to help and show their support.

The process of creating a studio has its hurdles. I had to do real estate- I’ve never done real estate before. As a small business owner, there’s no guide or anyone telling you what to do. You have to figure out what all of the pieces are and where they go.

On the studio itself: 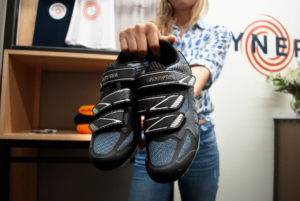 Our mission is to inspire positivity through fitness, music, and community. I want to see our studio being a place of positivity and inspiration instead of something people feel like they have to do. I want our classes to be something people want to do.

I want people to feel like they can be normal and real instead of adhering to a prescribed image. Real bodies, real people, real relationships are missing in a lot of elements in our lives today. You’re not on your cell phone for that one hour. Right now we don’t have any metrics or mirrors because I really wanted to hone in on that- it’s you in a room, and it’s not about what you look like.

We’re approachable. We have toe cages on the bikes. Rather than pulling in people who already spin, we want to be accessible to people who don’t really know if they like it yet. Clipping in (bike cleats) can be really intimidating for people spinning for the first time.

On advice to someone trying spin for the first time:

It’s super vulnerable to try something new! You’re not alone. Every class, there are always people trying something new. There’s always growth in trying. It’s only 45 minutes! You just don’t know until you try. And that’s okay. You don’t have to be the best. There’s a misconception that everyone has to be the same in a fitness class. We all have different bodies and minds, and it’s okay- it’s good to be different.

On what makes Liza feel powerful:

What makes me feel powerful in this role is breaking that superficiality of fitness culture that originally deterred me. The fact that people coming to class trust me enough to spend 45 minutes with me is amazing. That trust makes me feel powerful. Everyday people are coming in with their bodies and their baggage and saying, okay, I trust you to take me on.

As a young person, something that’s surprising and power-invoking is support from everyone along the way. I’ve been really lucky about who I’ve worked with in the area so far. For me to pitch something and for those people to say yes- that made me feel powerful. I really am passionate and confident in my idea, and, when other people see that, I find that empowering. And being close to family and friends is also a plus. 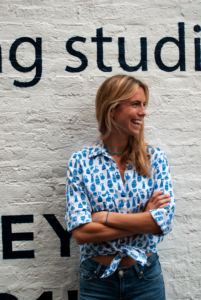 With our Teen Spin program in Winnetka (the same one Liza started while in high school!), a bunch of our Teen Spin instructors write their college essays on building leadership and confidence through teaching spin. I feel good knowing that we’ve helped build a program that builds confidence in young people before they go to college.

On what Liza is listening to right now:

Leon Bridges’ new album on repeat. Ella Eyre is a badass if I need some girl power. Rolling Stones, Fleetwood Mac, Carole King are staples if I’m sick of the new stuff. Otherwise, I use Spotify’s Discover Weekly playlists and radio, and get obsessed with a couple of songs. This week it’s “Watching from a Distance” by David Ramirez and “Golf Angel” by Minke.