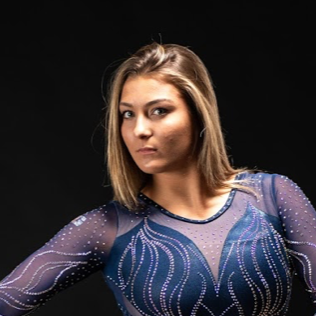 Liv Karas: The Strength of Women and Gymnastics

As a twenty-one year old gymnast for the University of Michigan, Olivia “Liv” Karas performs to perfection on and off the beam. Starting at the age of two, Liv has been training almost non-stop carried on by her parents, teammates, and the power she feels as a female athlete. The Power Thread sat down with Liv to talk athletics, teammates, and how the sport of gymnastics is changing for the better. 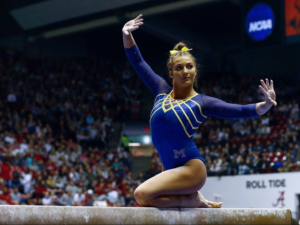 When did you take your first gymnastics class?

I was a very rambunctious child. I was one of those children climbing all over everything, so I started taking those ‘mommy and me’ gymnastics classes when I was only about two years old. About a year into those classes, I started doing actual gymnastics classes. I was so into the classes that when I was five, a coach at the club approached my mom to see if I would be interesting in joining the pre-team team at the club. I was so young, I didn’t really know what that meant, but I knew it meant more gymnastics so of course I wanted to join.

Gymnastics has sometimes been portrayed as a very emotionally and physically taxing sport. Have you ever experienced this?

Yes and no. Gymnastics in itself is a very hardcore sport. A few years into being on that first team, a new coach joined the club. He was very aggressive. We were all so young, and he was pushing us far beyond our limits. It was so awful, I ended up quitting. I was out of gymnastics for about six months and ended up getting depressed. I had this void. There was something missing. I decided to just go back and deal with it, but that coach ended up getting fired. My second coach Irina, she became like a second mom, but there is a lot of physical and mental stress that comes along with gymnastics. You’re pushing yourself to the limit all the time. Just walking into an event, you have to walk a certain way, pose a certain way. Things that don’t seem very important, become important in gymnastics. I was very lucky that my environment was more warm than intense, but those things just come with the sport. It’s a production and a sport.

Has that aspect of ‘production’ carried over into your life outside the sport? 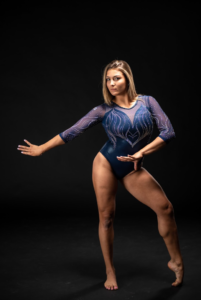 Definitely. That has really become a part of me. A day in the gym comes with a lot of things. As a gymnast, I am a perfectionist. Everything in my life has sprouted from the fact I want everything to be perfect. I am the same academically as I am athletically. For example, a beam routine; you can’t wobble, you have to stick your landing, and that has carried over into my academics. To write just a three page paper, I give myself a week because I edit it so much. I strive for perfection. It’s a connection I didn’t really notice until I got to college. When I started to look back on my experiences, the production in the gym has carried over into my life.

In that realization, how has college affected you as an athlete?

The good news is as a gymnast, you really learn to do a lot of things on your own from an early age. My practices growing up would sometimes go until nine at night. My parents would obviously make food for me, but I was usually heating it up by myself, eating by myself most the time. In high school, I’d leave school early to go to practices. I got pretty used to doing things for myself. Definitely in college there are more variables I have to factor into my schedule. Luckily, being an athlete at Michigan, I have so many facilities available to me, but I want to be a regular twenty-one year old college kid too. I want to go out with my friends. Sometimes I have a lift at noon and can’t be out until one in the morning, but sometimes that is what I wanna do to be like a normal college kid and have a social life. That can be hard, trying to be the athlete and a regular college kid. In competition as well, I’m competing against some big names that I’ve followed for a long time. I have to curb the fan-girl and keep my head in competing. We’re also competing in massive arenas. At my last meet, there were thirteen-thousand people there, but I thrive off performing and pressure. Any energy in an arena, you can either have it be a negative thing, or use it to fuel you.

The sport has molded you into such an individual, what does the team aspect of bring to gymnastics?

It’s different. I’m not up on a beam with teammates, I’m there by myself. In sports like field hockey, you can be doing everything right, but if another teammate has a bad pass, the whole play doesn’t work. If I mess up on beam, it’s not any of my teammates fault, it’s my fault, but in gymnastics, everyone on the team puts as much trust in each other as they do themselves. I can’t physically do anything to help a teammate, but I trust them. It’s looks so different, but the sport is so team oriented. A lot of it is also behind the scenes. When we’re not competing in an event, we’re setting the boards for another teammate, setting up mats. We’re like a pit crew for each other. So, there’s so much team effort the general public doesn’t really see like they would in other sports.

With the attention given to gymnastics in the past few years, among the cases of sexual misconduct, did you find the sport changed at all?

It’s been tough to be a gymnast during the past few years, especially being associated with gymnastics in Michigan, but there has been such a coming together of athletes and of women that has really sparked changed. I’m really excited about that. My hopes in this change are that, as a community of gymnasts, we can move forward stronger and together. I don’t wish for this to be something that defines gymnastics, but something gymnastics as a sport has overcome as a community.

What makes you as a gymnast, as woman, feel powerful?

Being a part of the NCAA and representing not only Michigan, but female athletes. Gymnastics is a sport where we’re in leotards. We’re pretty exposed while competing. Showing people this is not a pageant, this is a sport arguably equally as hard and as taxing as football, sports that are seen as the sport. I would argue, put any them in a conditioning test against one of us, and they’re going down. It’s really empowering to represent that strength as a woman. This is a time where women’s voices are being heard more than they ever have been, and as a female athlete I hope that continues, because everyone’s voice is important. 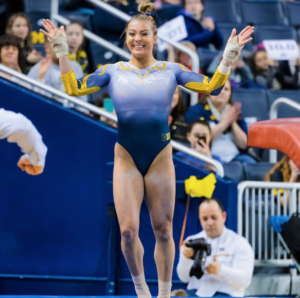