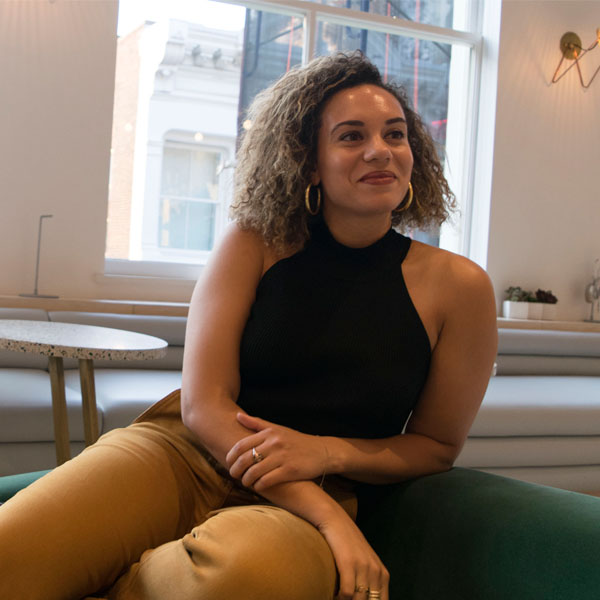 Laura originally grew up in Chicago and has lived in New York City for the past few years. She is now the Director of Retail & E-Comm at The Wing, a work-space and community for women and gender non-binary people, as well as the Founder of Bloom Journal, a website highlights entrepreneurial women through interviews and creates platforms for said women to meet.

We met Laura at The Wing Soho and she quickly showed her energy, excitement for retail, and ability to manage any task put in front of her. She was clearly driven and motivated to empower women. We talked with her about her career, how to negotiate a salary, how to manage a side project outside of work, what it means to her to be powerful, and the importance of always speaking up.

Laura, where are you from and what did you study in school? 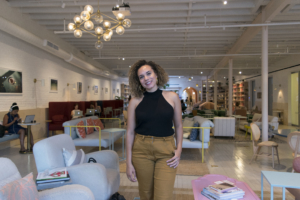 I’m from Chicago and went to Washington University in St. Louis where I double-majored in Economics and Spanish and minored in Art. I always felt like St. Louis was a city that allowed me to grow into myself. During college, I played college soccer and studied abroad in Santiago, Chile where I focused on oil painting and interned with a fashion designer, Ignacio Lechuga. I always loved fashion, but my heart was with the nonprofit industry. When I got back, I knew immediately that I wanted to go back to Latin America which prompted me to apply for a Fulbright Scholarship that eventually took me to Montevideo, Uruguay, for a year after college.

While living in Uruguay, I started Girls Score Goals, a girls’ soccer programs designed to teach English through sport. As the Fulbright came to an end, while I loved what I was doing and thought I should work in the nonprofit sector, something pulled me to try the fashion industry.

I moved back to the US and started a job at Abercrombie as a merchandiser and was based in Columbus, Ohio. Two and a half years in, I decided to quit my job without a job, which was a big risk, and move to New York. I felt so trapped in Columbus. The city wasn’t the most culturally, socioeconomically, racially, and politically diverse which as a woman of color grew increasingly awkward to live in. I had moments where I didn’t feel comfortable in my own skin due to the lack of diversity. Once I moved to New York, I found a job very quickly at H&M where I headed up the US Online Kids business and was later promoted to head up Women’s & Divided. I was there for two-and-a-half, almost three years and I loved it.

What was your first job?

I had about 8 months before I went abroad after college where I worked as a market researcher at Mazda during the day and after work, I worked at a restaurant from 5:00pm-12:00am. I worked 9:00am-12:00am for 8 months! I was hustiling! I was so excited to go abroad, but I knew I needed to save money before going, so I worked extremely hard.

Was it hard to find time for yourself when you worked long hours?

In the moment, I was so young and had so much energy. I also had an end in sight which made my long hours manageable. I was a young person in my amazing hometown of Chicago, it was hard but a great experience. 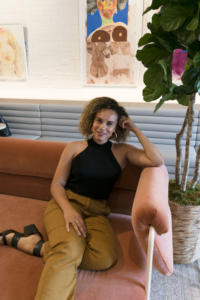 Now that I’m a bit older, I can say that doing whatever you need for yourself is so important. It can be hard sometimes to say “no” and to prioritize yourself. New York, specifically, takes up your time because so much of the energy of the city is getting out and networking. We’re career sharks here which is exhilarating but exhausting. You are constantly not able to say “no” because it could help you get to the next big thing in your career.

What advice do you have for young women starting their career?

The biggest piece of advice that I have for young women is to shake your imposter syndrome. I read recently a stat that men will, on average, apply if they meet 4 out of the 10 requirements. When talking to my friends, I’ve seen so many women not apply to things because they were “too junior.” We should be applying ourselves and demanding a seat at the table regardless of our years. Just go for it!

I was one of those young people that didn’t always speak early on in my professional career. If you are at the table, you are at the table to say something. If you see a process that’s broken, and you know how to fix it, then say it. There are so many filters on women, and even more on women of color, that stop us from idea sharing; we need to start speaking up.

One of my friends, Lisa Shanahan, in an interview for Bloom Journal once said, “Do no harm and take no shit.” I feel really powerful when I do things for me and for the right reasons…When I can overcome societal filters because of gender. When I do these things, I feel like a badass. I don’t swear or raise my voice, but I am not going to step down if I know I am right and I have done my research. I will stand behind my values and viewpoints.

What is Bloom Journal and when did you start it?

When I studied abroad in Chile, I was sexually assaulted by a friend of mine–someone whom I considered a resource and support system. When I got back to the US and for much of my remaining time in Chile, I wasn’t supported. I reached out to Wash U and they didn’t help much. They said they would provide resources and they didn’t provide them. This happened to me in 2010, at the time long before #metoo and #timesup. No one was talking about it. I genuinely thought I was the only one who had ever been raped or assaulted. Even the head of the study abroad program was not providing the empathy they should.

At the time blogging and media was so much about fashion, the mental health, self-care, and wellness movement hadn’t started. Before any of those concepts, I came up with the idea for Bloom where I could help build a sense of community. I had been thinking about this idea forever, but didn’t have the spark and when I moved to New York, I felt so inspired. I was an economics major and I love interacting with powerful and entrepreneurial women. Less than one percent of investor funding goes to women of color. If guys aren’t going to let us in, we need to talk about it.

How do you recommend women negotiate a salary? 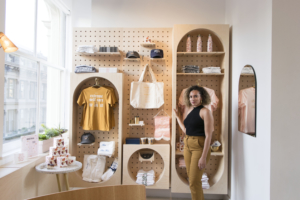 Always ask for a pay increase! Every month, I like to  write out what I did and put numbers to it so I know how I am driving the business forward and I also feel accomplished. That way, when someone challenges your worth, you are ready to go with your value. It took me a while to realize that no one will ever fire you for wanting more money or wanting a promotion. Ultimately these are business discussions that we should all be having regularly. These discussions don’t have to be emotional, it’s just money.

Women are taught that money is emotional, private, and impolite to mention. When you start living in New York City and see how much money some people make I realized pretty quickly, that it’s all just business. The key to getting a raise is to have a manager who champions you and recognizes your work; someone that lifts you and makes sure your voice is heard.

What is your ultimate goal with your career?

I have never seen a black Director of Retail in my life. I’ve been in an industry completely driven by the women’s wallet but dominated by white men. I feel very confident that I will be one of the most powerful women in retail period and to see a woman of color doing that will change some dialogues. I am excited to get to a position where I can use my privilege to pay it forward in the same way that people did for me. I have been so lucky to have worked with some very kind women and men who have lifted me up and recognized my talent, I look forward to the day when I can do that too.