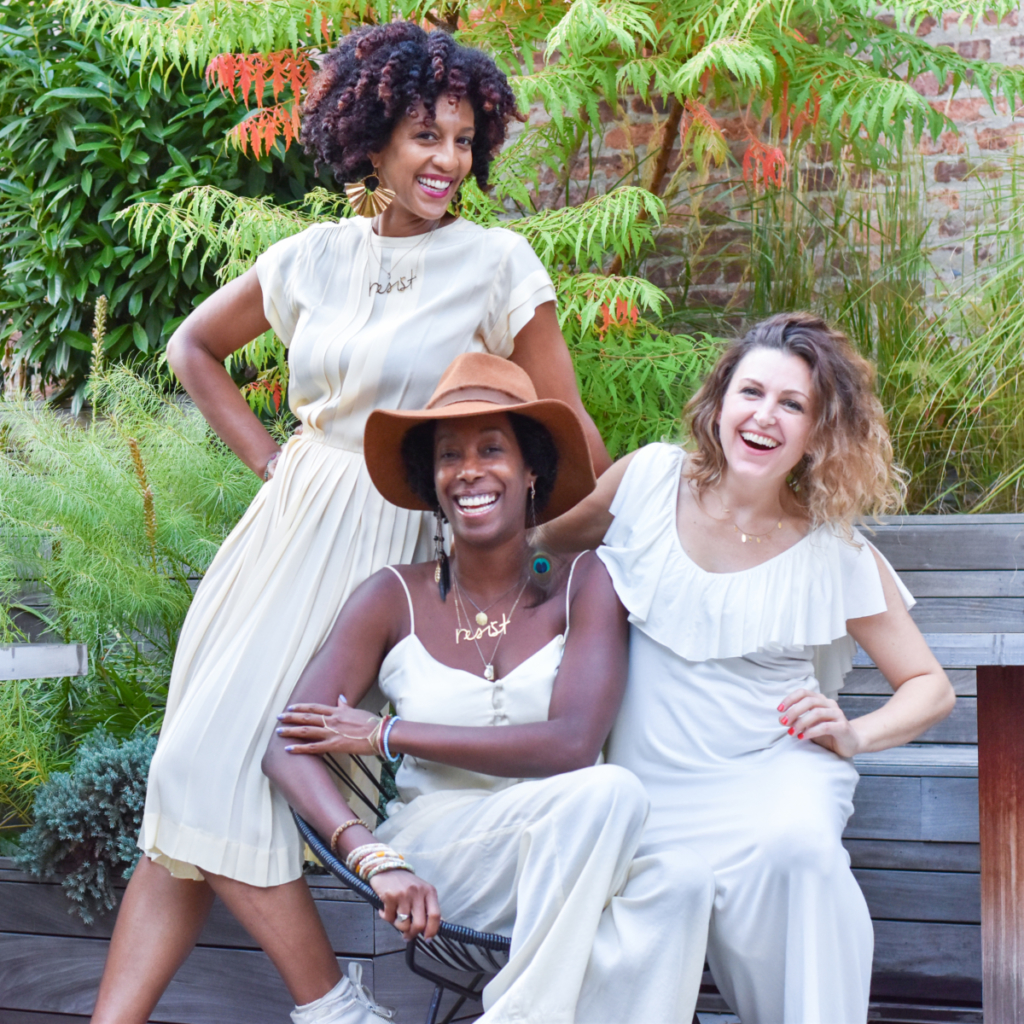 The Resistance Revival Chorus is a group of women-identifying people who collectively bring together songs of resistance and power as a tribute to the historical importance of music in protest movements. The Chorus was created in 2017 by a group of women who worked on the Women’s March. The Power Thread sat down with three members of the chorus, Kate Quarford, Monique Jebessa, and Solonje Burnett, at Assemblage in NoMad, New York.  (In the photo above, left to right: Kate Quarfordt, Monique Jebessa, Solonje Burnett.)

Where did you grow up, and how did you end up in New York?

Monique: I am from Providence, Rhode Island, and I always thought I would move to New York after school. I went to the University of North Carolina in Chapel Hill.

Kate: I just celebrated my 20th year in New York City. I grew up in Connecticut, moved to Boston for college, and then lived in Italy and Spain for a while before moving to NYC.

How did your career lead you to becoming involved with the Resistance Revival Chorus (RRC)?

Monique: I am a professor of yoga at the Bronx Community College – I often integrate discussions of philosophy and spirituality into my classes. Additionally, I work at RISE, a program through the Kripalu Center for Yoga and Health, where I teach the science behind how meditation and yoga can make us less stressed.

Paula Henderson, a badass baritone sax player, invited me to the chorus. She knew I would love to be part of the community space and use my voice to fight for justice. I joined in July 2018. I must say, the chorus a kind of vortex. Everything shifts when we all get together. It is such a nourishing, beautiful experience.

Solonje: I wear several hats, all tied to creating community. I host monthly parties at spots like Le Bain at the Standard and Soho Grand.  I co-curate a day-party called Hot Situations. I also consult on issues in diversity and inclusion. My primary role is as co-founder of Humble Bloom, a cannabis education company. We focus on humanizing cannabis through immersive inclusive educational experiences connecting people to the plant, brands, and thought leaders with integrity, disrupting the stigmas around cannabis use and advocating for those who’ve been disproportionately targeted during prohibition. I joined the chorus in August 2018, during a time of extreme transition as I was splitting from my husband. At an event in NYC, I ran into Ginny, a co-founder and the artistic manager of RRC. There, I was prompted by friends to ask her about the Chorus, and she invited me to join. A couple weeks later I went to my first rehearsal. It was exactly what I needed, a new supportive energy structure. I continue to feel loved and held by all the women involved.

Kate: I also wear a lot of different personal and professional hats. I’m an artist, educator, school co-founder, and mama to three beautiful kids. I’ve spent the last five years co-founding and helping to lead an arts-based middle school, City School of the Arts. Our mission to use the arts as a pathway for rich academic learning and socio-emotional growth. It’s been a wild ride designing a school from scratch and bringing our vision to life. About two years ago, I began losing steam a little. I was hustling super hard–raising three young kiddos, working around the clock at school, and meanwhile feeling increasingly heartbroken about the state of the world. I was teaching arts activism at school but felt like it was missing from my life. In a moment of real desperation, I wrote in my journal, “I want to make music again–I want to sing with other powerful women about things I believe in.” In what felt like a crazy coincidence (or maybe a straight-up answer from the universe?), my dear friend Abena emailed me a few days later to tell me about this activism-focused women’s chorus she was helping to create and asked if I wanted to join. I jumped right into the mix. 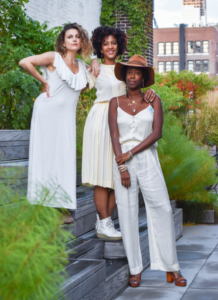 Solonje: When we are singing out in a public space, we are creating a broader collective. We are projecting emotion and thought through the physical action of vocalization. Our work is about creative action not just words and intellectualism. We all are pushing for a greater good, human connection, and universal understanding, and it resonates to my core. Every time I put on white and become one with these women, I am inspired.

Monique: I get spiritually charged up by the chorus. It grants me the ability to transmute my rage and sense of injustice into song and joy. Everyone needs to be able to tap into something better, something bigger than themselves. When we take action from a more inspired place, we have better solutions.

Kate: I think that when we talk about social change, the conversation is often disembodied. When we engage using only our brains, we lose so much of what the body can bring to the story. Singing harnesses the intelligence and presence of our full selves. Not just our heads, but all of our ways of knowing: our hearts, our guts, our bones–and most importantly, our connection to all these other people who are making music along with us. When we sing as a chorus, we take up space to claim our rage and our sadness, and we transform it into the kind of joy that moves mountains. We’re not waving away our heartbreak; we’re alchemizing it into power. It isn’t magic, but it comes pretty damn close.

What was your favorite or most empowering performance with the Chorus?

Solonje: One of the most memorable performances with the Chorus was on church steps at the Families Belong Together March. I was so emotional that at some points I couldn’t sing. I stood, holding the hands of my sisters, completely overwhelmed with emotion. I’m first generation and my family is from the Caribbean. Looking out at the diverse crowds united by the strength of our voices. It was really, really impactful. As the child of immigrants, without generational wealth, I have had to push through so many barriers to be where I stand today. Knowing that white supremacist systems keep Black and Brown bodies in cages everywhere hurts me everyday. That performance, and my work with Chorus, enables me to transform my sadness and frustration.

Kate: The most memorable performance for me was when we sang at the Women’s Unity Rally in Foley Square last January. Alexandria Ocasio-Cortez spoke and electrified the crowd before we went on. During our set, I looked out into the huge sea of people stomping and clapping and singing along with us, and all of a sudden I found myself unexpectedly locking eyes with one of my 7th grade students who was there with her mom. We had this amazing flicker of mutual connection and admiration, and I sang the whole rest of the song right to her. I can still see her smile in my mind’s eye. The next day at school, she ran up to me in the hallway and gave me the biggest hug ever. I’ll never forget that.

Monique: One of the first nights I was with the chorus we performed at one of the Resistance Revival Nights in Central Park. I heard many female artists and singers share their artistry; it was magical. It is incredibly important to exercise our rights as humans to speak up about what we care about. I feel empowered to be in a position where I can speak out and use my voice, and that night made me feel encouraged to speak out more often.

Kate: Another incredibly memorable show for me was the Vanity Fair’s Women of the Year performance. It was my first very big show with the chorus and it was very high stakes–all these celebrities in the house and so many lights and cameras. At the end of the night we sang “Rich Man’s House,” a song that comes from the labor movement. Every time we sing it, we change the lyrics to reflect where we want to take our power back from. That night we changed the last verse to say: “I went down to the White House and I took back what they stole from me–Took back my dignity, took back my humanity.” And then we stomped through the final chorus repeating, “Now he’s under my feet, under my feet… Ain’t gonna let the system walk all over me.” Singing those lyrics onstage that night in front of all those live-streaming cameras, I had this realization that as restrictive as our culture can sometimes feel, it’s still amazing to me that we can stand together as citizens and protest our country’s leadership in such a public way. It was the first time I felt a true flicker of fear at how exposed we are. And yet, it felt so necessary to speak that truth. It was electrifying.

What is the role of music and singing in your life? How has music shaped who you are?

Solonje: I have been singing since I was a child. All beginning with classical vocal music lessons.  It gave me presence and contributes to how I carry myself in the world. While I was studying at Wellesley, I continued to pursue music. After school, I spent my share of time performing in bands, managing artists, and continuing to be an advocate for the arts. Music and artistic expression have always been an integral part of my life. This chorus has filled a gap in my life and helped me rediscover the creative in a new way. Now I am singing to effect change in the world. Now I’ve traded out all the guys with the guitars for women in white.

Monique: I was a shy kid. Singing in the shower was my kind of artistic expression. I began to sing seriously when I took voice lessons in graduate school. I had so much fun and I didn’t care if I was heard or if I performed. I started sharing my voice publicly when I began to incorporate chanting into my Yoga practices.

Kate: I sang a lot as a young person, and I was always involved with musical theater.  In the process of early motherhood and building the school, a lot of my artistry got squeezed out of me. Little by little, I’m reclaiming it. I’ve realized that life is not going to get any less chaotic, but it feels urgent to reintegrate art into my day-to-day. Being with the chorus has really opened me up, brought me back into resonance with myself, and reignited my painting practice too. Ultimately all of that makes me a better teacher and mother. 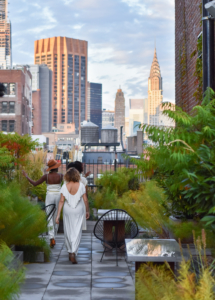