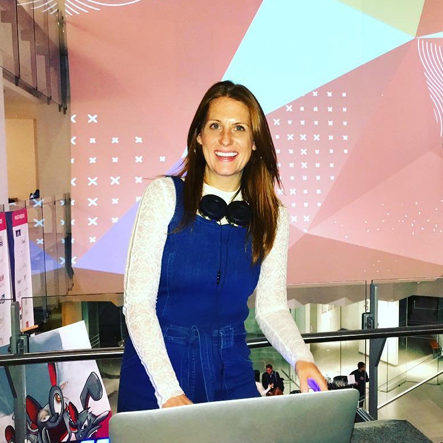 DJ Megan Taylor was named “Chicago’s #1 DJ” by respected publications. She is known for her innovative expertise and experience DJing around the U.S. and internationally for parties, weddings, and workout classes. In Chicago she is known for her leadership, ability to read the crowd, and passion for music.

TELL US ABOUT YOUR BACKGROUND.

“I work at Fig Media in Chicago, a Chicago-based media and creative arts company. We do filmmaking, photography, and DJing. I started on the media side and eventually moved more into DJing events.  I grew up in Princeton, Illinois and moved to Chicago to go to DePaul for college. I am much more of a city person, so it was nice to be in the city for school. It was very diverse, and nice to be in a place filled with diversity. I was a math major originally and switched to an art major. I applied to take classes at School of the Art Institute of Chicago one summer, and took a video editing class. I loved the combination of mathematical and artistic skills used in film editing. It was creative, but had a bit of putting a puzzle together. I also interned at a bunch of places including Fig Media. I eventually worked for them full time and have now grown with the company.”

HOW DID YOU BECOME A DJ?

“I had the opportunity to DJ for a high school prom in Chicago. Now I have DJed a variety of sweet 16s, proms, weddings, and more. It was in the school’s gym, but so much fun. Luckily Fig booked the best private events at the same time, so I had many opportunities to DJ, and was able to grow with the company. With my work ethic and passion, I ended up being booked for party after party. I said yes a lot and eventually I was a DJ. The thing I always found so difficult was: how are we supposed to know what we want to do when we are only 22?  I am still trying to figure out who I am going to become, and I am 35. Following who I am and my passions have been values that are important to me.”

WHAT IS YOUR FAVORITE PART OF BEING A DJ? 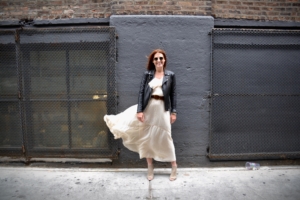 “I have had really amazing experiences DJng so many parties and doing so many bookings. It has dropped me into so many fabulous settings and cool places.”

WHAT ADVICE WOULD YOU GIVE TO SOMEONE TRYING TO FOLLOW THEIR PASSION?

“My internships were amazing! If you don’t know what you want to do, just try something. You do not need to figure it out right away.  But interning, asking for mentors, and saying yes to a job or opportunity will allow you to learn. It is really about the way you do things that is important.”

TELL US ABOUT THE WAY YOU DO THINGS?

“I have based my life off of being in the “YES” of things. I have just followed my curiosity in a lot of ways. If I had not said yes to DJing that first prom event, I may not have known I loved DJing. Just saying yes has allowed me to be really open and go far. Being open and having an open mind has been the best learning tool I have had. I have also learned to ask for things that aren’t necessarily given to me. I was going to Budapest one time, and I wanted to find a DJ gig there, so I kept asking people and eventually I found these DJs that were willing to book me.”

WHAT DOES IT MEAN TO YOU TO BE POWERFUL?

“I think that I found my power in being honest and sharing what’s in my heart, and what I want.  Believing in myself has allowed me to learn my own power and voice. I have done things I did not iagine, I decided I wanted to run a marathon once, and I did it. I have found when I stretch beyond what I think is possible, I find my power. I usually find myself and find out who I am when I am stretching beyond what is capable.

I have found it is also important not to think that there is a story that your life has to follow.  It has been interesting to be a female DJ, which is untraditional. Defining yourself by your own life is very important instead of what you think it is should be.”

Being a female DJ has been an asset in many ways. From a client perspective, they think it’s awesome. It has also been good because I think DJing uses a lot of feminine skill sets, being intuitive and being in relationship with the crowd. The downside is there aren’t a lot of role models. It is a male-dominated space and there isn’t  a lot of room for females.

WHAT IS YOUR FAVORITE PLACE YOU HAVE BEEN BOOKED?

Budapest was the coolest! I have also DJed in California, Mexico, Arizona and more.

TELL US ABOUT YOUR RECENT WORK AND OTHER INTERESTS.

“I recently got my Masters in something totally different. All through my 20s I took classes towards personal development and leadership. I didn’t know who I was, so I took classes to help me become myself. I was so passionate about it, so I got my Masters in transformational leadership. It has helped me in every aspect of my life. I understand people and relationships really well. I love coaching and mentoring as volunteer work. I believe in helping people become the best they can be. As I build on to djing, I will continue to combine these skills. This came from the mentality of being in the Yes.”