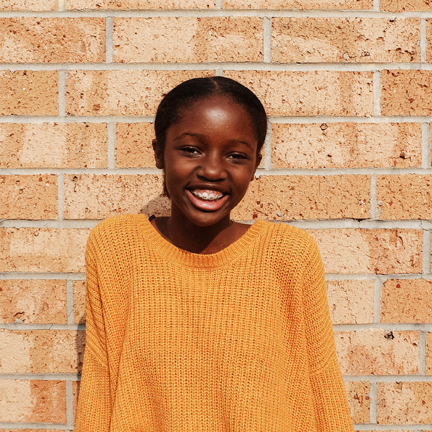 Christina is 16-years-old and the founder of The Women of Color Project (Project WOC). She started this project from her Bay Area bedroom. She shared with us the goals of her project, growing up in Uganda, what it means for her to be powerful, and her long-term goals and interests.

Christina, tell us about where you grew up.

I am originally from Uganda, and I moved here, to the Bay Area, a couple of years ago. The Bay Area is my second home. Having Silicon Valley right here, there’s so much diversity, which I love. I didn’t have much culture shock when I moved. Right now I’m a junior in high school. I love listening to older people and learning. That’s why I founded Project WOC.

Can you tell us about the time you spent in Uganda?

I grew up in central Uganda. I loved the simplicity of Africa. Everyone is very family-oriented. I lived there in the early 2000s, so there wasn’t much technology. We sat and talked and played cards. We didn’t have iPads or iPhones. The fact that your family is everything to you and that everything is so simple is special. I think it is really beautiful. If I lived there now, I would think differently and miss technology, but, at the time, I didn’t know the difference.

When did you move to the Bay Area?

I was nine. I was young, so I just went with the flow. I think if I moved now it would have been a big culture shock. When you’re young, you don’t think as much. It was really cool. Most people don’t understand that kids in other countries have similar experiences. I watched Disney and liked similar things. My uncle got married at Stanford when I moved here, and it felt a little out of a movie.

Why did your family make the move?

The American Dream! It is a place of lots of opportunities and the best universities in the world, and I am getting many opportunities that I wouldn’t have received in Uganda.

Do you have an upcoming internship or job?

Next summer I am interning at a clinic in Argentina for a month. I’m so excited because I am so interested in Spanish.

What are your current passions and interests?

I love Spanish. I really like languages. I think I will minor in it in college.

What is the Project WOC  and why did you start it?

I started it two days after summer break, so June of 2018. I have a really big imagination. I come up with things in my head, but never carry them out. I thought, “wouldn’t it be cool to have a platform to empower girls of color.” It can be a non-profit and help all these girls. I thought it would be too much. I knew I wanted to be the CEO of a company once I grew up but I didn’t know what exactly I wanted to do. I started laying out this project. My goal is to have a Ted talk event one day and have women come and empower young girls. But I stayed focused on school and waited until finals were over. I started emailing people. This is when I knew there was no turning back. It is hard to take the first step, but you can’t sit and worry. You have to go forward. The end goal is to make it a non-profit. I want to inspire girls beyond America and in less developed countries. There are ways to connect and benefit every young girl of color. I just have to find a way to cater to each demographic. That is the end goal. I hope to still be doing this in college.

I think social media is really great, and we are so lucky to have it. I give girls takeovers of Project WOC’s social media, and they document a day in their life. They record it. We have academia season, art season, and Athletics season.

A lot of African countries have Snapchat accounts, and they do takeovers with people all around the world. I wanted to take this idea and make it educational. I wanted to make it something that they could check out.

This world would be a better place if everyone was empathetic. I am only 16, but I think it is so important to be empathetic. This person feels this way, and maybe I don’t feel similarly, but I am there to stand for them.