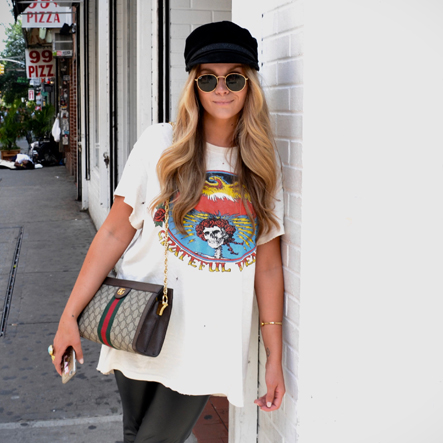 Audra, where did your interest in Activism start?

“Most definitely after I went to Ohio State. My first friend in college was a gay man and he really became my introduction to the LGBTQIA community. It’s important to share that and give him full credit as he came of age and into his identity as a gay man in an even smaller, far more regressive town in Ohio than I was raised in. Though it was only 2012, it was a different time. I knew of things like feminism, racial and socioeconomic inequality and of the entire queer community’s existence, but I didn’t have the vocabulary nor the firsthand knowledge to address in a meaningful way. I hadn’t checked my privilege yet because no one forced me to do so.

Thankfully, he put me on the path and strongly encouraged me to take an introductory women’s studies class. The first day of that class I literally cried tears of joy. For the first time in my life I felt like I was in the right place at the right time. When I told my college advisor that women and gender studies was my passion, she, like everyone else, took me to task in terms of what I would do with that professionally. Of course, I was discouraged but I just knew women’s, gender and sexuality studies had to be a part of my degree or I would be actively disregarding what I know to be my calling. Instead, I settled and declared English Literature as my major and heavily pursued my writing while taking as many women’s and gender studies classes as I could.

My junior year, was when I grew confident enough to partake in campus activism. I suppose being a bit more involved in the Women’s Studies department created those opportunities for me. I still remember my first action was a vigil for all women of color who had been murdered by police in the last five years. I think it was then that I understood how powerful and almost performative, activism truly can be.

During that time, I was in a Reading Women’s Writers class and in the middle of class, the professor put me on the spot and asked if my major was WGSS. I said no and she just sort of deadpanned, “Then what else are you going to do with your life?” I couldn’t answer as I was so taken aback but I think she was trying to get across that this was clearly what I loved and it was a disservice if I didn’t integrate it even more into my curriculum. She literally stopped the class, dragged me across campus by my hand, and forced me to declare a dual degree in Women’s, Gender and Sexuality Studies that day. I’m forever indebted to her.

My last year of college I wrote for any platform that would give me a voice. I found a way to leverage both my love of writing and of course, fighting for social justice. I covered everything from abortion restriction in my hometown to both political conventions in 2016.”

How did you continue both journalism and activism in New York after graduation?

“I was freelancing the entirety of my senior year and afterward for a publication based here in New York. Fortunately, a few months after I graduated I was able to move and accept a position as the assistant to the Editor-in-Chief of Worth magazine. I felt very much like I was leading a double life. During my 9-5, I was working on a magazine whose target audience was people who had more money than they knew what to do with – people who most likely contributed to our current administration. And every hour not in the office I was engaging in social justice activism throughout the city. I worked diligently to plug myself into that network here and literally any action I read or heard about, I participated in.

After I eventually left Worth, I, alongside a group of women I met at the first Women’s Convention, began establishing the first Women’s March chapter in New York City. Life as an organizer has proven to be tough and unfortunately, it doesn’t exactly pay the rent. Following Worth, I became assistant to the CEO of SoulCycle. I was only there for a short time but I learned an invaluable lesson and it was truly the catalyst for evaluating what I truly wanted from my career and in turn, my life.

I began revisiting the idea of furthering my education. In the back of my mind, I’ve always toyed with the thought of getting my P 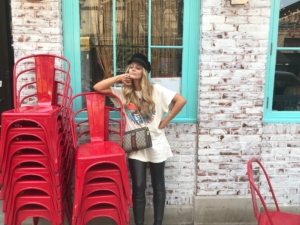 hD in Women’s Studies so one day, I’m able to be the professor my younger self so desperately needed. But for now, I am seriously considering going to London to pursue an M.A. in Gender and Sexuality later this year.”

What did you learn from each of these companies and experiences?

“I learned that any opportunity you are given is a gift. Whether it turns out to be exactly what you wanted, chances are favorable it’s exactly what you needed. A wide-range of experience is the most valuable currency. I also learned that it’s okay to walk away from something that doesn’t serve your soul. But first, invest in a plan B. And C.”

Tell us about your experience with Women’s March?

“It’s been one of the most enriching experiences of my adult life thus far. Since the 2016 election, there’s been an undeniable swell of grassroots activism. This year alone, I’ve worked on and participated in actions that will be known as hallmarks in this country’s history. From school walkouts to civil disobedience actions in protest of deportation and family separation, I feel humbled just to be a part of it. And to do it in New York City, which feels like the epicenter of it all, is even more of a privilege.

I also want to tip my hat to the more seasoned activists I’ve met and worked with along the way. Particularly women of color who do not receive due praise. I understand most will look at these pictures and see a blonde, white girl with a Gucci bag and draw a conclusion that I do this because it’s some sort of hobby. I show up and will continue to do so, because I vehemently believe my liberation is bound within others. Thinking about how much I’ve learned from the men and women doing this work alongside me, in addition to the architects that came before me, brings such gratitude to my heart.”

Tell us about your most memorable activist experience.

“I helped organize a combined school walkout for a couple of schools in Washington Square Park this past March. Aside from making some calls and amplifying their efforts via our social media platforms, the students did all of the heavy lifting. They wrote the the speeches, created the artwork, coordinated with the community etc. Seeing them march from their schools and hearing that raw pain in their voices firsthand was a moment I will cherish forever. I hesitate to call them kids because I feel like it somehow invalidates and patronizes who they are. But ultimately, these are teenagers with more authority and valiance than I’ve seen in most adults. Especially the ones who should have made it an impossibility for a child to be murdered in a place of education. As an adult witnessing the movement immediately following the Parkland massacre, it should motivate all of us to be far more solid pillars of support for the youth in this country. To quote one of my favorite activists, Erica Ford, “This work is not about letting the light shine on you. It’s about letting it shine through you.”

“To be an activist is very simply to live. Anger is necessary. It’s the fuel that makes us get back in the ring after we’ve been overwhelmed. But kindness is the salve that allows us to make that return with a heart that is incapable of being hardened. In a time when there is more than enough vitriol to go around, the power is not in how loudly you can scream or how many people can hear you. It’s about living everyday reminding others that no one is “too” anything to care deeply. Power is not found behind the podium or on the main stage. It’s right next to you. That’s where this work truly begins and ends.”