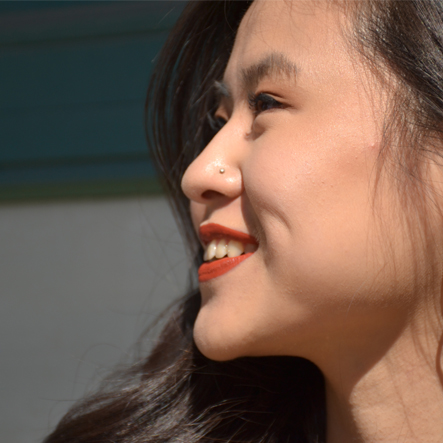 “Being powerful is just doing your own thing without caring what other people think…It can be hard.”

I’m from the greater Los Angeles area. I grew up in the suburbs, not the glitzy glammy part of LA. It was a very homogenous community. Mostly Chinese families. Everyone was very traditional and conservative.

It’s confusing. I always felt a bit lost when it came to my identity. I spent a lot of time with my family in China, but I didn’t feel like I belonged. But I also did not feel like I completely fit in with my American friends. For example, I did not understand baseball or basketball. My parents did not take me to American things like that. I would place myself as an Asian American. There are a lot of people like me in my neighborhood in LA.

In college, I became more tuned in with my American side and less into my Asian roots. I’m not sure if that’s good or bad.

Being powerful is just doing your own thing without caring what other people think. This is something I’m still working on. It can be hard. A lot of things were decided by my parents, which is common for a lot of children.  Now I’m trying to figure out what I think and what I want to be. Being more self-aware is important; that’s what power means to me. That can be hard to do!

Product or item that empowers you?

My nose piercing! I got a nose piercing a few weeks ago. It makes me feel badass. I always thought they looked really good, so I finally decided to get one.

My parents don’t know about it. I’m honestly a little freaked out that they will find out. They really did not like me getting my ears pierced when I was younger. Tattoos and piercings are a big no-no to them. They think it represents not being focused on academics.

Anyways, I got it because it just felt right, something to do for myself, something that I could do without my parents approval. Sometimes I wouldn’t do things I would enjoy because I didn’t want to disappoint them.

I always thought nose piercings looked really good. It adds a little bit of edge without being over the top. The piercing artist told me that you want it to be subtle enough that it looks like part of your face but also adds a little character. I feel like it does that!

The day I got it was a very random day. I went with my friend Lola and it was spontaneous. It was after spring break. I had been thinking about it for a while. The only thing holding me back was my parents, so I just decided to go for it.

I had it done at Enigma Tattoos & Body Piercings on Delmar Loop in St. Louis. It’s near Seoul Taco. https://www.enigmatattoos.com/

The stud feels huge! It felt really large at first. I kept seeing it on my peripheral vision and thought: do I have something on my face? Is it a bug? But now that the swelling went down, it’s just part of my face like my eyebrows. It now feels very normal.

I want a nose ring hoop at some point. But in a few years, I would probably take it out. It’s a fun, young thing to do, but I don’t see it as a long term part of my face. I don’t want it in my wedding photos, for example. I want my wedding photos to be timeless and classic.