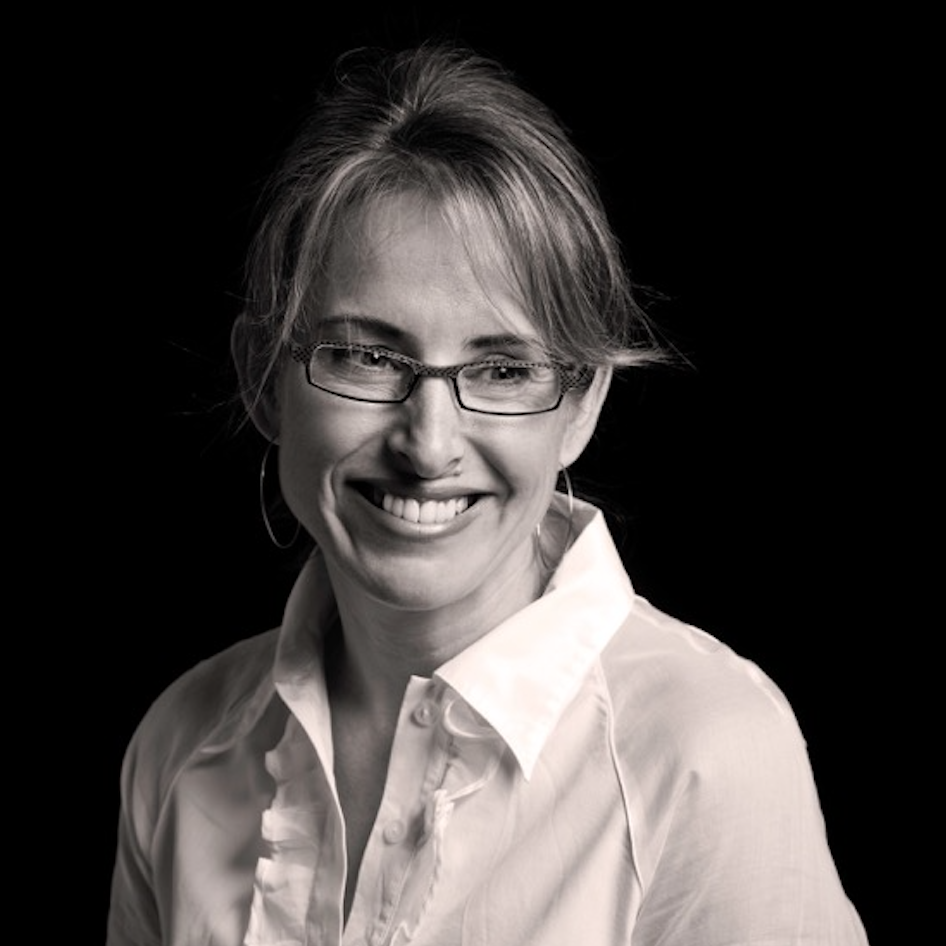 Deanna began her design career in Los Angeles thirty-one years ago. Since then, she has served as a board member for the American Institute for Graphic Arts and recently completed her board service for the nonprofit STL Village. In 1995, she moved to St. Louis to open a second office for her long-time employer, Santa Monica based Douglas Oliver Design Office, to form Oliver Kuhlmann. In 2001, after a successful six year partnership, they parted ways and Deanna established Kuhlmann Leavitt, Inc. Today, KLI is a multi-faceted firm known internationally for its work in the built environment, brand strategy, print and new media. They manage and lead complex projects for both public and private entities throughout the United States. Along the way, Deanna has formed many lasting relationships with clients and vendors alike. We sat down with Deanna to discuss her career path, her company, and what inspires her.

What first sparked you to pursue your path? Did you always know you wanted to go into design, and what helped jumpstart your career coming out of ArtCenter College of Design in Pasadena?

I grew up designing stuff and even at a young age knew that I wanted to be a designer, though back then I didn’t know it was called graphic design. My freshman year of college I learned about ArtCenter, a rigorous school, and knew I wanted and needed to be there. I moved to the LA area in 1987, which was a magical time to be on the West Coast, learning and working in graphic design. As a young woman coming from the Midwest, a patriarchal place back then, the West Coast was a fantastic, limitless place to live and start my career. I didn’t feel tread upon in St. Louis, but I just didn’t realize how open-minded LA was until I moved back to St. Louis years later.

A few weeks into my second semester at ArtCenter, I landed an internship at Morava Oliver Design Office, a boutique design studio in Santa Monica, where I continued working after graduation, staying for nine years. My path was pretty linear: I knew what I wanted to do. I attended a fantastic school, was lucky to get a paid design internship in a wonderful place, and took on another job hand drawing signs for an upscale, nearby grocery store. Design was a part of nearly everything that I was doing. When I graduated college and began working for a Santa Monica firm, it was a seamless transition to a place with amazing clients, vendors, and colleagues. I was given a lot of responsibility, direction, and freedom from the get-go. For me, it was the perfect fit!

Could you tell me a bit about your role as a board member on STL Village and about the overall mission?

The Village movement started in Boston by people who recognized that older Americans no longer have the built-in family networks nearby that they did 30 years ago. Because of this, people are being forced to move out of their long-time residences and into assisted living perhaps sooner than necessary if they just had a little bit of community support…someone they could call to change a lightbulb, give them a lift to the grocery store, or meet up for a neighborhood stroll. Villages were created to give people a network of like-minded neighbors interested in supporting each other. When St. Louis chartered a chapter, the founders asked me to help develop the brand, which eventually led to a board position. Like most board positions, my role was to weigh in on strategic direction, contribute financially, and share my expertise. Needless to say, you wouldn’t want a board full of people with similar backgrounds—culling different points of view is the most powerful way to further the mission of an organization. I stepped down from the board after four years but remain involved and close with the many friends made along the way.

Could you tell me a bit about Kuhlmann Leavitt and your role there as the lead designer and president?

Next year Kuhlmann Leavitt, Inc. will be celebrating our 20th anniversary. A woman-owned, multi-disciplinary graphic design studio, we create brands, design for environmental graphics, signage and wayfinding, print and digital media. We don’t specialize in any one industry or region; we work with clients anywhere in the world who enjoy collaborating with a small, experienced, and passionate team. One thing that especially defines our work is our love for materials. We are continually experimenting with, and seeking out, unique things to enhance the custom nature of every client’s project.  This plays a large role in giving each of them a unique brand voice and in keeping ourselves challenged as designers.

How do you see female leadership or gender discrimination manifest within the design industry? Is there an approach to leading that you take as a woman in power that you feel is different than others?

I worked for one company when I was in college that was led by two talented male designers who could not have been better mentors. No pretense. No bullshit. From the get-go Emmett Morava and Doug Oliver offered opportunity, guidance, inspired design, and access. They scooped me up and nurtured me along. I never felt like I lacked opportunity. I was lucky and grateful for it. For the past 18 years, I have had my head down raising kids and running KLI and am embarrassed to say that I’m not sure what the current landscape looks like for women in design. My sense is that it is better than in years past. Recently, I was invited to participate in a women’s conference and the conference theme struck me as a little too anti-men, so I declined. I absolutely would not be where I am today if it weren’t for the many amazing people, many of whom were men, along the way. Candidly, I am saddened by the prevailing women vs. men climate. Just treat people as you want to be treated…didn’t we all learn that in grade school? I think my kids’ generation certainly did, and I’m optimistic for the future.

Who inspires you, and why?

There have been many remarkable people who appeared (and continue to appear) at the right time during the various stages of my professional development. Doug Oliver was the partner who gave me a paid internship, then a rewarding job, and then asked me to open up a second office for his Santa Monica company in St. Louis. From the outset, he shared his knowledge of business and design, amazing sense of humor and a seat at the table—not many people would do that for a kid right out of college. Then there was Deborah Beckett, a graphic designer who totally changed the direction of my studio by opening my eyes to design for the built environment. One of KLI’s earliest hires, she was a Designer with a capital D, taught me a tremendous amount, and is a dear friend.

There have been several design heroes in my life, too, who through the years always made themselves available with encouragement, experience sharing, or just a chat over a meal. Lella and Massimo Vignelli were especially gracious. Always interested in my latest design project, and they also offered counsel through partnership opportunities, economic downturns, and during one of my visits to NYC, Lella loaned me her vintage Burberry raincoat for the weekend since I didn’t pack a jacket. You know, there are designers who think they’re famous and they’re kind of assholes, and then there are people who are truly important and they couldn’t be more magnanimous. We should all strive for the latter.

I would say stored knowledge is empowering. I’ve been doing what I’ve been doing for over thirty years so walking into just about any professional situation is no longer intimidating. It’s not that I know everything, I surely do not, but I do have a vast network of people and experiences to draw from. It helps too, that I still love what I do and enjoy my team, clients, and project partners. We have a lot of fun and that is powerful.

What do you think will be the biggest challenge for the next generation or our upcoming future?

There are more design graduates now than ever and that could put downward pressure on design fees. Many people of my generation managed to make a nice living in design, and I hope that will continue for the industry overall. The good news is there is also greater demand for good design. The world has become collectively more sophisticated about design with no lack of people who understand that good design is good business. When Apple went mainstream, the public gained firsthand knowledge of what great design can do. Designers should thank Steve Jobs and his team every single day for offering their brand of design to the general population instead of designing down to them. We are all better for it.

What do you value the most in the people you work with or your community?

Good, caring, honest people who practice the golden rule are the people I want in my life. When people ask what we look for in an employee, I say that we just want them to be normal. We want to spend our time with someone we’d want to have a drink with, is interesting to talk with, is down to earth, and if they are applying for a design position, they have to be talented. We also want them to “come with batteries.” You can’t be someone who sits there and waits to be told what to do–you have to be a self-starter. We have time to train and mentor you, but if you finish what you’re doing and do not ask how you can continue to help, then you’re not contributing in the right way.

What is some of the best advice you heard in your professional experience or words of wisdom you like to live by?

About three years ago, I was in a meeting for an important architectural project and the client was pressing the design team to commit to a quick turnaround for further evolution of several design ideas.  Frustrated, the lead architect said, “We just need time to design.” All projects have schedules, some more reasonable than others, but when someone is asking for ideas in a time frame that you feel is inadequate, it is really important to speak up. Pick your spots though – after all, we are in the business of pulling rabbits out of hats and making magic happen.