Black Surgeon in a White Space: An interview with Dr. Milhouse

The Power Thread spoke to Dr. Milhouse, a urologist practicing in Illinois, who, in addition to her work in surgery, mentors and inspires young aspiring physicians that identify as minorities in medicine. She spoke to us about finding a female Black mentor and relating and empathizing with her patients as a Black woman herself. Being powerful to her means being compelling and inspiring. “Real power ignites passion and interest in others.” 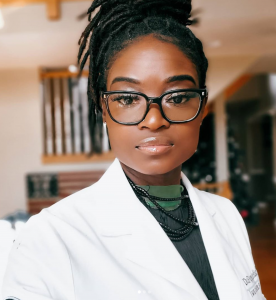 What about urology drew you in compared to other specialties?

What opened the door for me to even consider urology was representation. Urology, up until the moment I met a Black woman, was a male reproductive specialty: for men, by men, and particularly white men. That’s how I saw the field. So to meet a Black woman who was not only a woman, but a Black woman urologist just completely knocked all those expectations out and opened this door into the field. She was breaking a mold just by her existing and succeeding in the field. But we are very, very, very under represented. I mean, I think there’s 2% urology is only 2% black women.

I thought she was such a badass, and I wanted to be that. Then, it just went from there.  I shadowed her. I introduced myself to her and said I really want to learn more about what she did. I spent some time with her in the clinic in the operating room, met her colleagues, and ended up doing research with her. And it was life changing. When you see some representation of your gender, it puts you in this position of hope and of inspiration. And if I had not had that, I would have missed out on this incredible specialty. It makes you think about other individuals who don’t know because they can’t see what you see. I would have never thought I would be a surgeon if you would have asked me medical school day one year one. Now I realize that I just didn’t see Black surgeons. And I know this work is uncomfortable. People breaking barriers have to be uncomfortable. We’re going to start seeing transgendered individuals breaking the mold, and that’s what needs to happen. A lot of molds need to be broken in medicine.

Do you think your identity as a woman of color has shaped your time as a medical professional?

It does, I mean, it is identity, right? Your identity is Blackness. I am more conscientious about cultural needs andrelating to patients than the average physician may be because I recognize that there are historical barriers or cultural barriers that have not been addressed. I think, unfortunately, we’re very slow in medicine to recognize the work to be done to relate to our patients of different backgrounds. I have had patients who say I can trust you. I think it is because they sense that I’m coming from a more empathetic background, especially amongst minority Black and brown patients.

Career-wise, I have been fortunate that I ended up in a great training program. I felt very, very much respected and invested in, and it was a bunch of us from all backgrounds. We had three other women during my time. I think it’s a program that thrived on being progressive in their demographics.

I think the hardest thing is knowing what to do when the patient has really disrespected you, whether it’s based on your gender or your race. As a trainee you don’t know how to react, and you’re also in a vulnerable position where you don’t have control. Like, it’s not really your patient. It’s your attending’s patient. Now as an attending, I try my best to stand up for my team, whether you are the  medical student, resident, or front desk. If a patient says something offensive, I will not have it. 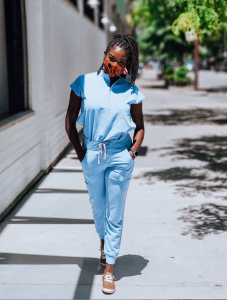 Do you have any advice for aspiring female physicians?

Firstly, you are just as good as anybody. We women tend to doubt ourselves. One quote I really love is: “Have the confidence of a mediocre man.”

A lot of people get ahead because they’re talented, because they’re brilliant, because they are creative. On the other hand, there are plenty of people who get ahead just because they have enough confidence in themselves. One thing people ask is how did I succeed in residency and the first thing I’ll say is I faked it till I made it. I told myself, Oh, I’m a good surgeon, I just need to get there. I’m going to be just as good as any of the best residents. I just need to get there. I deal with a lot of imposter syndrome.

Secondly, I’d say: Find your tribe. Find a mentor. Find other people that support you unapologetically. Find people you can be yourself with; people who you can share your fears, anxieties, your goals, your hopes with. Maybe it’s one person, not a whole tribe, but find it.